First of all, this photograph was difficult to take. 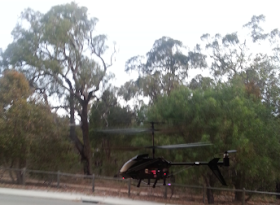 Second of all, this is one of the most fun inventions ever.

And I have a greater respect for helicopter pilots. I found an even better backdrop, but this little thing is highly sensitive to wind. 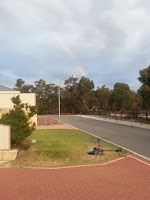 The question I'd like to ask is - when are scientists going to make even moderate gains in battery efficiency? This thing last less than 20 minutes per USB charge.

I've gathered no data as yet on charge times.
I want a bigger copter ;-)


Imagine what scaling down battery size, the way microcomputers and hard disks have paved a path to miniature. After healthcare, of course, think about what you might like to do?

Think exploratory devices - for caves you could use perhaps like the ones I just saw in Prometheus, but as quadcopters? Clever people are already using these to map rooms and find things, good steps towards disaster relief efforts.

But my number one would be the oceans.

Who shall I quote talking about how much we know about astronomy and cosmology, compared to the dark, inhabitable depths of the world's ocean. 95% of ocean ready to be explored - the other, final frontier.

All this seeded by the announcement of footage of a giant squid airing recently on NHK - I can't wait to see that footage on Discovery.

Impressive as this is, finding a kraken would be the one cryptid I'd like come true!

Who knows what other discoveries could be made by an autonomous, sensor laden, self propelling robot with the capacity to last for days?