(Slightly) Off Topic - Science of Scale. 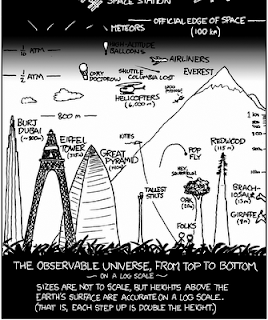 Sometimes relating to scale can be difficult for our humble brain. Often in Oracle we talk about millions of rows, terabytes, cartesion joins etc, but really how big is a "million". I think we really underestimate it.

Once upon a time, popular webcomic xkcd posted a logarithmic scale of the universe. This is a great way to demonstrate how far things are - as long as you understand increases in magnitude.
(click on the image to see the whole version)


Then I encountered this interactive illustration, thanks to Phil Plait's Bad Astronomy website. It was great since you got to slide from a grain of rice to the size of an atom.

Trouble is, we also wanted to go in the other direction. In the meantime, I encountered the following video from the American Natural History Musuem. It zooms from Tibet to the edge of the known universe, and back again.

Apparently if you have the time, you can create your own tour of the universe/solar system.

Recently, some clever people at Fotoshop released this flash demonstration (2010), allowing you to zoom from the edge of the known universe all the way to Plank's constant - smallest logical length of anything.

Update - 2012 version, snazzier, more interactive. Thanks Chris!
How it was done in 1968. Thanks Cary via Bad Astronomy 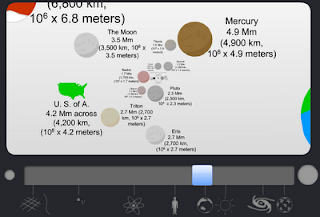 It's amazing to see the gaps between the sizes of some objects, and just quickly zooming from infinity to infinity. This is probably the best illustration of scale I've seen so far.

And here we are stuck on a pale blue dot.
Scott Wesley
Share